I’m in love. His name is Harrod. 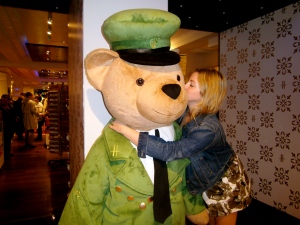 As much as I would love to say that the Houses of Parliament or St Paul’s was my favorite part of London, alas, my heart belongs to Harrods. It is a truly magical place. I guess this is how kids feel when they go to Disney after their parents get divorced… #rightofpassage

It’s like I finally understand what Belinda Carlisle was singing about in 1987.

Ooh, Balmain, do you know what that’s worth?
Compared to Harrods, Bon Marché’s the worst,
They say at Harrods, bears come first,
A milkshake from Harrods can quench your thirst,
Ooh, Harrods is a place on Earth!

If you think I’m exaggerating, listen to this: you can take a break from your shopping spree at the Ice Cream Parlour, complete with a milk shake bar. 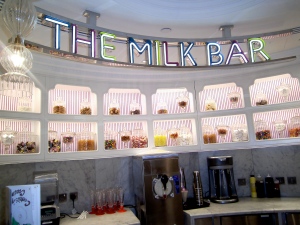 You’re probably thinking, “This sounds like Christmas morning!” Well as a matter of fact…

They don’t celebrate Thanksgiving in London, oddly enough, so after, like, labor day, they jump straight into Christmas!

Harrods has something for everyone! Even a Mackenzie-Childs room, where your mom can buy more turtle pots that your dad will probably arrange to look like they’re procreating! What, that doesn’t happen at your house?

Still think I’m being a drama queen? (Me, dramatic? Never!) Wait ‘till you hear this. There’s a Pizzeria, where the chefs–wait for it–SING OPERA. No joke. They literally belt it out while they’re tossing your dough.

But wait, there’s more. What is this, my birthday? One of the escalators (because there are several) is Egyptian themed and called the Egyptian Escalator. Now, not only can you walk like an Egyptian, but ride like one too!

Even the bathrooms at Harrods are superior. They have actual perfume. Not like cheap bathroom cologne, oh no, we’re talking Chanel and Prada quality scents. Can’t go walkin’ around Harrods smellin’ cheap.

Remember that scene in the Parent Trap when Lilo is like “I’m Hallie,” and Natasha Richardson is like, “Let’s spend the rest of the day getting lost in Harrods”? Well that’s how Nanner and I spent Saturday afternoon. No, really, this is how I found her…

They should really take before and after pics of people at Harrods. Walking in, looking solemn, and leaving, looking like John Stamos just said you were pretty.

This entry was posted in Salopes Aiment Ceci. Bookmark the permalink.

One response to “Harrods”