Life, Liberty, and the Pursuit of a Penis

Disclaimer: Before you read this post, it should be noted that for every error my French students have made in English, I have made one much worse in French. A few stand out in my mind, such as the time I was talking about the French using fewer preservatives in their food, and I said that in the U.S. we eat more “préservatifs”…little did I know that “préservatif” is French for “condom.” Yeah, I said that Americans eat more condoms. Or the time I only wanted a little bit of cake and said I just wanted a “bite”…of course “bite” (pronounced “beet”) is a slang word for male genitalia in French. Go figure. Or, maybe worst of all, the countless times I have exclaimed that I am so “excité” in class, before remembering that in French, “excité” doesn’t mean “excited,” but rather it means “sexually aroused.” It’s no wonder I’m their favorite teacher.

As a foreign language teacher, you expect your students to make their fair share of mistakes. It’s almost guaranteed that they will pronounce “clothes” like “clothe-ez” and say, “I am agree,” when they concur with one of your points. I knew that they would make most H’s silent (i.e. “here” sounds like “ear”), yet add H’s where they don’t belong (i.e. “Are you hungry?” “No, I hate a happle halready.”) They often add “ate” to the end of verbs, like “contributate” for “contribute,” “acceptate” for “accept,” and–in one instance–“pertrubate” for I’m guessing either “perturb” or “protrude,” but who’s to say?

These mistakes are all harmless and, for the most part, don’t really change the meaning of the sentence. It’s not until a student says, for example, “I love ze rape music,” that the real problems ensue…

Me: “You love what?”
Student: “Rape music.”
Me: “Like…Robin Thicke?” (Because “Blurred Lines” is more than a little aggressive…You know you want it)
Student: “No, like Jay-Z. Jay-Z is my favorite raper.”
Other student: “He and his wife were raping in Paris just last month!”
Me: “Oh, you love rap music. Jay-Z is your favorite rapper. Got it.” Close call.

Then there was the day I asked everyone to go around the room and say their favorite movie. One boy said that his favorite was–and I quote–“Uh-Weave-Ay-Wun-Few-Eey.”

Me: “Sorry, what movie?” (thinking this must be a Japanese film I’m not familiar with)
Student: “Uh-Weave-Ay-Wun-Few-Eey.”
Other student: “That’s mine too.”
**murmurs of agreement from the rest of the class**
Me: “And this movie is from which country again?”
Student: “It’s a very well-known American film.”
Me: “Could you remind me of the plot of this film?” (wondering what the hell they’re talking about)
Student: “Brad Pitt and his bruhzer are fishing in–”
Me: “OH! A River Runs Through It!” (Uh-Weave-Ay-Wun-Few-Eey…should’ve known)

One day a student approached me with a personal problem…

Student: “Madame Ebb?”
Me: “Please, call me Lucy.”
Student: “D’accord…Lucie? I know you wanted me to expose myself in class today, but–”
Me: “WHAT?!”
Student: “You asked me to expose myself for the rest of the class today, but–”
Me: “I did no such thing!” (and frankly, I resent the accusation!)
Student: “But I am supposed to expose myself in your class today, and I was wondering if I could do it next week instead. It’s on the calendar.”
**lightbulb moment where I remember “exposé” is French for “presentation”**
Me: “Oh…yes, you can present your presentation next week.”
(Editor’s note: I never, under any circumstances, allow students to ACTUALLY expose themselves in my class.)

And then there’s the moment that every English teacher in France faces at some point during his or her first year: when a student brings up “a penis.” 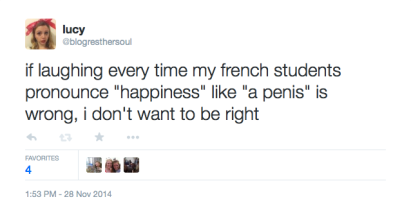 Of course they don’t hear a difference. But then again, as one of my friends pointed out, is there such a big difference, anyway? Tomayto, tomahto?

(Yes, in my English class, there’s a big difference.)

Sometimes I’m tempted not to correct my students when they make these delightful little mistakes in their charming French accents. I usually try to break it to them gently like, “I promise what you’re saying is totally endearing and adorable–not to mention would probably get you pretty far with the ladies in the United States–but that’s not actually how you say it.” I have to set them straight. After all, it’s my job.

“Kids, we have a very important lesson today.” #ShakiraShakira

This entry was posted in Nantes. Bookmark the permalink.