One of the best parts about studying abroad is being able to visit other places in Europe, like Cannes, Nice, Rome, Corsica, and, this past weekend, Amsterdam! Yup, Jeremy and I packed up and caught a train to the Netherlands.

We were our usual weirdo selves, of course…

I got to visit two of my friends from Sewanee, Margaret and Jaina, and meet all of their fun friends. 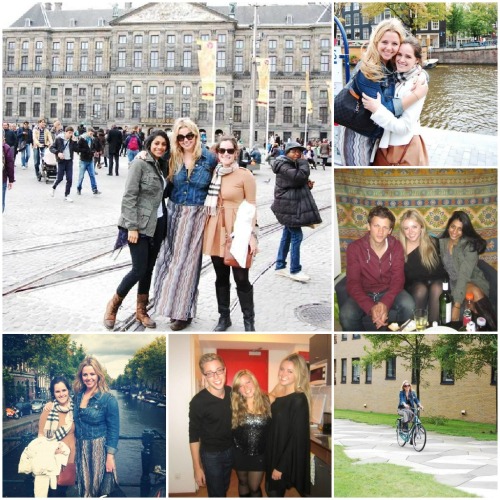 Oh, so I have a little SAT analogy for you… Paris:Metro as Amsterdam:Bike. There are literally more bikes than there are people in Amsterdam. They bike EVERYWHERE. If you know me, you know I don’t bike. Don’t let the picture above mislead you. When people try to say something is easy by saying, “It’s like riding a bike!” I’m like, “Is that supposed to reassure me?” Anyway, someone convinced me that renting a bike was a good idea. Yeah, NO. Within 5 minutes of maneuvering through busy Amsterdam traffic, I squeezed between two pedestrians, probably hitting them both, before my bike literally JUMPED up onto the sidewalk, forcing me to put down my foot onto what happened to be a beer can, which I smashed. I then got on the back of Marge’s bike, which was great, until she forgot to tell me she was getting off…needless to say I did a backward roll across the sidewalk. Not my best moment. Missing Alanis Morissette lyrics: It’s like renting a biiiikeeeee, that you just can’t ride!

What a cool city!  Walking around Amsterdam is amazing. It’s exactly what you imagine a European city looking like, complete with cobblestone roads and beautiful canals. We also visited Anne Frank’s house, which made me want to reread her diary, and the Rijksmuseum.

Besides being scared to death by a bicycle that I swear had a mind of its own, it was a great trip. I would love to go back someday!

This entry was posted in Visits. Bookmark the permalink.