Serial S2 E2 Recap: You had me at Hilal

Since last week’s episode of Serial, there has been a new development in Bergdahl’s case. He is going to the general court-martial on charges of desertion and misbehavior before the enemy, and he could face a life-sentence in an American prison. Koenig’s question is, has Bergdahl already been punished enough?

My question is (still), how does Sarah Koenig know the Taliban? Is that a perk of working for NPR? Do you have contacts in most Islamic fundamentalist political groups?

In this week’s episode, Koenig talks to Sami Yousafzai–a journalist who has been reporting from Afghanistan and Pakistan for Newsweek and The Daily Beast since 9/11–who got his information from a Taliban fighter named Hilal. Hilal says his guys heard a white man was sniffing around their neck of the woods, talking to locals, “sitting on top of hills”…not halal behavior for a foreign soldier. Haram, in fact. So Hilal’s crew decided to take a day trip to Mest. While they were resting at the mosque in town, they got word that the foreigner was at a kuchi tent. “Kuchi” means nomad. 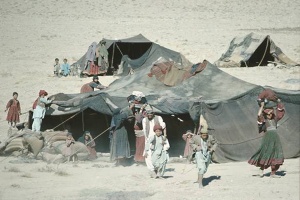 So they showed up at the tent and pretended to be local police. I guess Bergdahl’s white privilege kicked in because when he heard “police,” he suddenly felt safe and went with them willingly. But if we learned anything from Serial season 1, it’s that the police are not always our friends. Think Charm City.

The problem with this story is that the kuchi tent might be totally made up. The kuchi tent is basically this season’s payphone in the Best Buy parking lot. It might be the most crucial piece of evidence in the whole case, but there is no way to verify its existence. The reason it’s up for debate is that there were a lot of rumors flying around at this time. Some people say Bergdahl was drunk; some say he was looking for a holy place; some say he did karate.

At some point, Bergdahl realized these people were not the police, but in fact the Taliban. Can you imagine? You get on the back of some guy’s motorcycle thinking he’s going to give you a ride back to camp, and then he casually mentions that he’s with the TALIBAN?! Hilal says Bergdahl tried to fight back, but Bergdahl says he wouldn’t be that stupid. And according to him, he was in the middle of the desert when the Taliban snatched him up anyway. Either way, Bergdahl was understandably freaked out. They were treating him really weird. Many locals had never seen someone who looked like Bergdahl, and blue eyes are considered a bad omen there. One guy said, “See, you look like a small cat baby, with shining blue eyes.” What? I would go so far as to say that might be the strangest thing one human has ever said to another. They also thought Bergdahl might be drunk, but Hilal admits he’s never actually seen a drunk person, so I’m not sure how accurate that observation is.

Bergdahl says he was then bound, blindfolded, and moved around a lot. When they stopped, villagers–including children–mocked and threw stones at him. At one point, he tried to make a run for it but was tackled by a mob of people.

Nothing about this story is funny, except for maybe this. According to Hilal, in an effort to CHEER BERGDAHL UP, they pulled over at a grape orchard, and performed a traditional Afghan dance. The way he describes it makes it sound like a drum circle, but apparently it’s called “Attan,” and it was originally performed by Pashtuns during times of war or celebration but is now considered the national dance of Afghanistan.

Hilal says this had an adverse effect on Bergdahl, however, and did not calm him down in the slightest. Let’s all put ourselves in Bergdahl’s shoes for a second. You’ve just been abducted by a group of scary people whose culture you know little about. You have been tied up, blindfolded, and stoned by village children. Someone said you looked like a “cat baby.” They moved you to a new location, which anyone who’s read up on “stranger danger” knows is a death sentence. Now they stop in a vineyard, make a circle, and begin performing some sort of ritualistic dance. Who’s to say this isn’t what they do before they eat their prisoners?! Personally, I would be terrified.

Obviously, they didn’t eat him. I have never heard anything about cannibalism in Afghanistan, and I’m sure Bergdahl knew more about the culture there than I do, so I doubt that exact thought crossed his mind, but I bet he was really scared anyway.

But–much like Adnan Syed on January 13, 1999–Bergdahl doesn’t remember much of this. Maybe he was drunk after all.

Everyone knew the Taliban would try to get Bergdahl to Pakistan and turn him over to the Haqqani network, because Pakistan is a U.S.-ally. The U.S. military can’t just roll into Pakistan with guns blazing looking for their lost soldier. In other words, it’s the Taliban’s safe zone. The Taliban knew that was the obvious move though, so they decided to hang out in Ghazni for a while until the search eased up.

Finding the DUSTWUN became the number one priority, not only for Bergdahl’s platoon, but for all American soldiers in Afghanistan. All hands were on deck. If you were looking for Osama Bin Laden, you stopped to look for Bergdahl. They asked around and handed out candy to kids. They raided villages they had previously never heard of, and checked women’s faces to make sure it wasn’t Bergdahl in disguise. They were making a lot of noise and scaring a lot of people. One soldier recounts a time they showed up at a farm and terrified a cow so much that it literally GAVE BIRTH. I’ve heard of having the shit scared out of you, but having a fetus scared out of you? That’s on another level. Not only did this mission use a lot of the army’s resources, but it was also really dangerous. They didn’t have time to prep the way they would before most raids. If they got intel that Bergdahl might be nearby, they had to act right away. The soldiers were cold, sick, tired, and–frankly–pissed. Retired command sergeant major Kenneth Wolf tells Koenig the overall vibe was, “This is f***ing bullshit. He’s in Pakistan.”

…which, apparently, he was by this point. How and when did he cross the boarder? We’ll find out next week on Serial.