Unanswered questions going into episode 3 of Serial:
1. Was Bergdahl ever actually at a kuchi tent?
2. Did Sarah Koenig put the Taliban on mute so she could laugh at the word “kuchi”?

“Did he just say ‘cootchie tent’?! Wait, Dana, do you want to drive around Afghanistan to see if it’s even possible to get from Mest to the cootchie tent in under 21 minutes?”

3. Should “kuchi tent” be a euphemism for something?
4. Do I have the maturity of a 12-year-old boy right now?
5. Is “Taliban” singular or plural?
6. Seriously, can someone help me with this one?
7. How did Bergdahl escape?

This week’s episode of Serial covers the conditions of Bergdahl’s imprisonment and his two escape attempts. The first time Bergdahl tried to escape, he was gone for less than 20 minutes. He had noticed a gap in the Taliban’s watch the day before, so he decided to make a run for it while no one was looking. It was brave–and apparently required by the Code of Conduct for the Armed Forces of the U.S.–but fruitless.

After Bergdahl was captured, he was beaten and returned to his cell. During Bergdahl’s imprisonment, he was moved to several locations, each as dire as the last. Bergdahl was chained up, mocked, and neglected. He had diarrhea for 3 and a half years. He was filthy, dehydrated, and covered in sores. After hearing Bergdahl’s living conditions, it’s hard to imagine that he could be a Taliban sympathizer.

At first, Bergdahl’s guards questioned him. Naturally, the questions were completely relevant to the Taliban’s objectives.
Q: How do American officers get their prostitutes?
A: On street corners like the rest of us. I hear Paktika is the new Vegas.
Q: What do you drink on your base?
A: Anything and everything. American outposts in Afghanistan are just like MTV Spring Break trips.
Q: Is Obama gay?
A: Have you seen his wife? Michelle’s a babe.
Q: Is it true that all American women are prostitutes?
A: Yes! Every. Last. One. Of. Us.
Q: Do they sleep with animals?
A: Oh yeah. But actually, yes. It’s quite common for American women to sleep with their pets. So you’re one for five, guys.

Surprisingly, Bergdahl’s captors said they got no useful information from him. Really? Because your questioning was so logical and pertinent. Koenig says they were just looking for something that would embarrass America. Okay, visit a water park. Go to Walmart on a Saturday. Watch “Honey Boo Boo.” Watch anything else on TLC. You will find *plenty* of material.

In the meantime, rumors circulated about what Bergdahl had been up to. People said that he had a puppy, that he converted to Islam, that he played soccer… Sounds like someone has been watching too much Homeland. 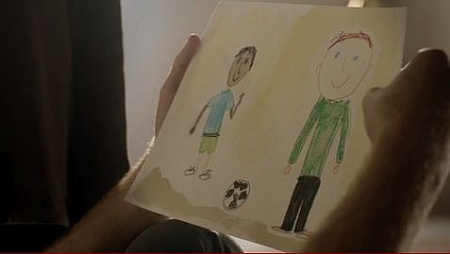 Maybe Abu Nazir also asked Bergdahl to teach his son English and then used his death to TURN BRODY AGAINST HIS COUNTRY. I mean Bergdahl. I mean…sorry, spoiler alert.

Life wasn’t great for Bergdahl’s captors either. They couldn’t leave or have visitors because their work was top secret. They were tired and bored. To pass time, they would create hypothetical scenarios of ways to get rid of Bergdahl, like releasing intel that they had Osama bin Laden so U.S. forces would plan a raid. They shaved his beard in ways they thought looked funny. They made videos of him from time to time, either to prove that he was alive or because they had nothing better to do. In these videos, they made Bergdahl wear sunglasses because a. viewers wouldn’t be able to see his eyes reading the cue cards, and b. they thought sunglasses looked cool.

Damn right they do.

In Koenig’s words, they were “young guys, shooting the shit, following orders.”

But then she tells us they made Bergdahl watch videos of executions. They told him about other beheadings they took part in. He was chained to a bed when they shaved his beard. He had to laugh at himself because he was scared not to. He thought that if he didn’t participate in their videos, they would kill him. That doesn’t sound like young guys shooting the shit. That sounds like terrorists.

By Bergdahl’s second escape, he had come to terms with the fact that it was “very much like a suicide mission.” He knew the odds were stacked against him, but what did he have to lose? Bergdahl had managed to secure and conceal several items during his captivity: one key, an 8-inch PVC pipe, an empty Mountain Dew bottle, a nail, and a wooden slat. I know…what is he gonna do with that? In spite of his lack of supplies, decrepitude, and fear of being caught, Bergdahl managed to unshackle himself, create a makeshift rope out of his chains and bedsheets, and escape out the window of his cell. He had no idea where he was or where he was going, but Bergdahl knew he needed to get as far as he could from his captors so that their search party would be spread as thin as possible. In the darkness, Bergdahl stepped off the edge of a cliff and fell on a hard, dry riverbed. Once the adrenalin wore off, the pain set in, and Bergdahl realized he could barely move the left side of his body. He crawled from ditch to ditch, and survived 8.5 days before being captured by the Taliban. He says that these days–when he was eating grass and drinking filthy water to survive–were the best of the five years he spent in captivity. “That escape was the last time I saw stars until the night Special Forces picked me up.” Bergdahl says he was tortured by the Taliban for months after his attempted escape. But he never apologized.